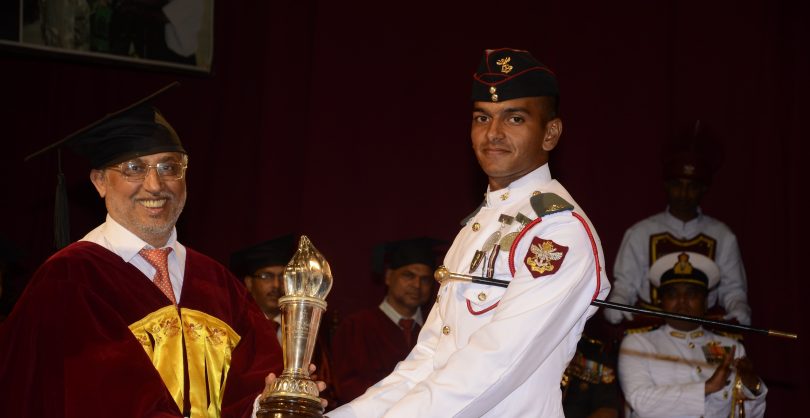 Pune 29 May (UNI) : Avail the opportunity to prove your responsibilities while performing duties for the security of the nation in Armed Forces said Dr Anil Sahastrabuddhe, Chairman All India Council for Technical Education (AICTE) here this morning at the convocation ceremony of the 130 course of National Defence Academy at Khadakwasla.
Dr Sahastrabuddhe further added that you are fortunate to complete your education at the worlds renowned defence organisation, where i feel proud to be the chief guest of this Convocation ceremony, the officers passing out should feel proud to serve the nation, since the Armed Forces is the important part of our nation, it is also needed to avail the advance technology and automation henceforth, as i had served the Pune’s Collage of Engineering, I am well-known to NDA for last two decades, I never expected that i will get a opportunity to come as chief guest for the convocation. I too had been promoting the students for joining the Armed Forces, the training which you had received for last three years will prove your caliber and your parents will always feel proud for you, I want to congratulate you and give my wishes for your future duties said Sahastrabuddhe.
The Chief Guest also appealed the cadets to carry forward the professionalism which they had imbibed here, the hard work done during the training will be exceptional while performing the duties which is dedicating towards the security of the nation.
The 130 course Convocation ceremony was held at Habibullah Hall, total of 298 cadets were conferred the degree from Jawaharlal Nehru University which included 110 cadets in Science stream, 124 cadets in Computer science stream and 64 cadets in Social science stream, this course included 6 foreign cadets.
The 130 course cadet DCC R Joshi won the Commandant’s Silver Medal Trophy and COAS Trophy presented by General K Sundarji, PVSM (Retd) for standing first in Science stream with highest FGPA (Final Grade Point Average), the Commandant’s Silver Medal and the Admiral’s Trophy presented by Admiral Suresh Mehta, PVSM, AVSM, ADC, and Chief of the Naval Staff (Retd) was won by BCA V Sangwan for standing first in Computer Science stream with highest FGPA, the Commandant’s Silver Medal and the CAS Trophy presented by Air Chief Marshal N C Suri, PVSM, AVSM, VM (Retd) for standing first in Social Science Stream with highest FGPA was bagged by DCC N Bhatt , the Chief of Naval Staff Trophy presented by Admiral OS Dawson, PVSM, AVSM (Retd) for standing first amongst all the three streams was bagged by DCC R Joshi. UNI XR 12 20