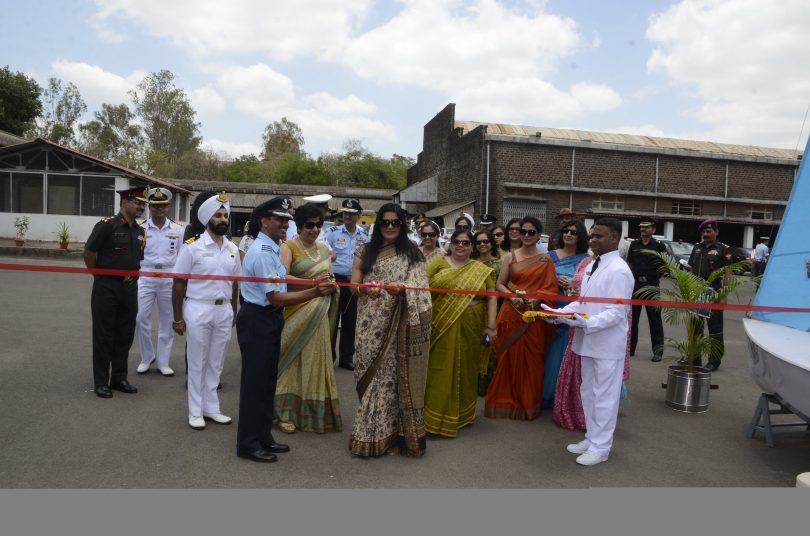 EXPO is a bi-annual event at National Defence Academy, conducted during the week preceding Passing Out Parade.  The event represents the culmination of various ‘hobby’ club activities at NDA.  Expo-Spring Term-2016 was inaugurated on 28 May 16, at the Manoj Pandey block.
As the name suggests, the event is an ‘exposition’ of the creative talents of NDA cadets. Cadets hone their creative skills through the medium of various ‘Clubs’ which they are a part of.  The first lady of NDA, Mrs Geetha Ashok. President, Family Welfare Organization in the presence of Commandant, Vice Admiral G Ashok Kumar, AVSM, VSM, inaugurated the exhibition.
The clubs range from Archery, Astro-Navigation, Aero-modelling. 10 Meter Weapon Shooting, Automotive, Arts, Photography, Dramatics, Music, Dance, Design and Crafts,  Artificial Intelligence & Robotics, Skeet Shooting, Golf, Trekking & Rock Climbing, riding and polo, Literature, Tennis, Squash, Martial Arts, Yoga, aerobics Public Speaking and group of Waterman ship clubs which include Sailing, Kayaking and Rowing.
The activities of these clubs are organised with clear cut objectives.  Recent improvements in infrastructure with the introduction to innovative equipment’s have supplemented their effectiveness, as a launching pad for cadets to demonstrate their creative essence to the world outside.  Various midterm hikes such as Scuba Diving, Trekking and Rock Climbing and White Water Rafting were organised so as to keep alive the spirit of adventure.
Commandants motivational awards were also given to proficient cadets during this occasion.Besides developing the skills of a ‘Gentleman & Warrior’ in this cradle of military leadership, cadets’ are expected to give expression to their creative skills, where, the clubs play a crucial role in doing the same.
Share on:
WhatsApp