PU
AIR DEFENCE BRIGADE HAS CONTRIBUTED IMMENSELY TOWARDS NATION BUILDING :
BRIGADIER SAIF UL ISLAM KHAN
Pune 27 July (UNI) :  Air Defence Brigade has contributed immensely
towards Nation building said the Commander and Brigadier of 787
(Independent) Air Defence Brigade Mr Saif Ul Islam Khan here this
morning.
While Interacting with media during the visit at the Base the
Commander further said that the Corps of Army Air Defence has a very
crucial role in the air defence of the nation from hostile enemy air
activity, since this brigade is responsible for the air defence of their
respective areas. As on Air Defence Brigade at Pune has also contributed
immensely towards nation building efforts with particular focus on
student outreach and image building campaigns. Besides this we have a
large area of response and our operations are varied said Khan.
While elaborating about the Army Air Defence (AAD) the brigadier
said that duty starts with our slogan ” Aakashe Shatru Jahi” (Destroy
the enemy in sky), we train the officers with the help of various
simulators where we operate with the High end and advanced technology,
during the training we energize enemy in the air  As a continuation of
endeavors to highlight the selfless service to the nation by the
Southern Army, I thought to bring the media here who can showcase our
Brigade to the youngsters of our country to be a participant in the
nation building endeavors said the brigadier.
Khan further added that  As part of the outreach campaign to motivate
the youth to join the armed forces, the units of the formation have
conducted a number of motivational lectures in various schools and
colleges. Educational tours and equipment displays have been conducted
for NCC cadets and for students of various schools, colleges. In a
recent unique venture, an orientation capsule was organized for the
probationers of the State Civil Services to give them a firsthand feel
of the Army Way of Life. While the formation has moved ahead on the path
of professional growth, it has simultaneously ensured total harmony with
the environment. Towards that end, numerous plantation and landscaping
drives have been undertaken to preserve the flora and fauna of the
Cantonment.
An equipment demonstration was organized to showcase the might of the
Army Air Defence, Features and capabilities of a variety of equipment
held with the formation were explained to the visitors during the
demonstration, besides the brigade the Heritage Hall speaks much more
for joining the force  which highlight the rich history of the arm.
UNI   XR/SP 15 30 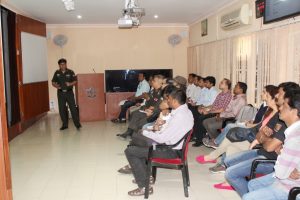