Pune 26 July (UNI) : On behalf of all ranks of Head Quarters of the
Command  the GOC in C Southern Command Lieutenant General Mr Bipin Rawat
today morning laid the wreath at the National War Memorial and paid
tribute to the martyrs who laid their lives at Kargil.
The day is celebrated as a  part of the Gallant Indian Armed Forces
“Operation Vijay”, on this  day in 1999 where they recaptured our posts
in Kargil, which was treacherously occupied by the elements of Pakistan
Army. A large number of retired and present Defense personnel’s were
present this time, the National War Memorial was kept opened for the
citizens to pay homage to the Martyrs from 9 am.    UNI    XR/SP 09 30 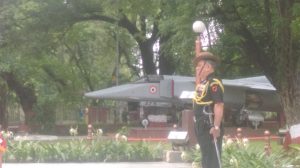