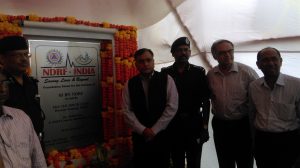 Oune 01 Aug (UNI) : National Disaster Response Force upcoming office in
the suburbs of Pune will be the best in country said the Director
General and IPS Mr O P Bali here today this morning.
Bali was in the city to lay the foundation stone of the new premises,
and after laying the stone he was speaking with UNI, he said  we were
operating our Battalion from Talegaon, atpresent we are operating from
CRPF campus, but looking to the gravity of our operations i thought to
have an individual premises for our Battalion, where along with training
all the other activities, Barracks and administrative work would be
carried,  as the importance of our Battalion is realized by the Central
Government and the citizens, funds were allotted and this Land at
Sadumbare Village was selected, which is very near to Pune and the major
part of the Hilltop residential areas, after completion of the project
this premier institution will be ready with all the advanced equipment’s
and the required infrastructure said Bali.
Bali further added that within two years the entire infrastructure
will come up, all flood related, land slide, chemical and biological
infra will be also added here, which is to help the citizens in natural
calamities, the entire battalion will start functioning from this place,
the Chairman of Hindustan Steel Mr Bahaduri has promised that he will
complete this project in two years, besides this project we are
establishing a Training Institute in Nagpur also, but this Battalion
will be specialized in Land Slides, since Maharashtra has very crucial
activities related to Land Slides, which was experienced in Malin and
Karla village near Lonavla, where NDRF had worked a lot, apart from that
we have Industrial emergencies in Mumbai, for that we are keeping one
team in Mumbai, which will look out for the buildings collapse.
While speaking on Netra, the DG said that at present we have 12
Netras in country for each Battalion, rather than if we get an advanced
unmanned vehicle, certainly we will go for that, at present we are
having negotiations with the Russian Govt, for this vehicle, which is to
result fruitful, as we have given a proposal for hard equipment’s
costing around 52 crore rupees for other states, as this Government is
very serious about the Disasters, they are supporting a lot, from last 2
years NDRF has up come up to the global standards, now its been
recognized all over the world, NDRF has become a specialized high-tech
standalone force, no where in the world you will find force like NDRF,
its been recognized also, last year we had worked in Nepal, where we
saved many peoples trapped in the debris there, since United Nations has
also recognized the existence of this force, now India has become
Disaster related Champion said Bali.
Bali while emphasizing on International relations said that we are
having conference in November at Delhi with 148 Asian countries, on 22
August this month we will have a BRIX Conference at  Udaipur, where
Brazil,India,China, South Africa delegates will participate where we
will discuss on Disaster Management, as we are having all kinds of
equipment’s needed, equipment’s are an dynamic concept, what you acquire
today may become ob-set in year to come, for that we research on it we
often go for it, we audited all our equipment’s during Nepal crisis, as
there where 34 countries and six teams, i personally went there and we
were second to none, equipment’s requirement keep increasing as Disaster
also have different flavors, though our force is well trained and
dedicated towards their duties said Bali.   UNI   XR/SP 14 30