NCC Directorate Maharashtra held its annual Banner Day event with a regaling parade and pageantry on 07 February 17 at the Army Ground Colaba. Rear Admiral Sanjay Mahindru, Flag Officer Commanding Maharashtra Naval Area was the Chief Guest and reviewed the Guard of Honour. after the review of the Parade the Jury’s declared NCC Group Pune as the winner of the prestigious Chief Minister’s Banner for the best NCC Group in Maharashtra for 2016. The Mumbai University Banner was awarded to Birla Science and Commerce College, Kalyan, and the SNDT University Banner was awarded to SNDT College Churchgate.

At the commencement of the parade, Major General D S Gill, Additional Director General (NCC) Maharashtra, brought out the achievements of the Maharashtra Directorate. He congratulated the NCC Maharashtra Contingent at the Republic Day Parade Camp for winning the Runners-Up Trophy, among-st 17 all-India Directorates, contesting for the Prime Minister’s Banner competition. He apprised the audience that the Directorate has always remained at the top positions at the National level being awarded the Championship Trophy 17 times and Runners-Up Trophy 7 times out of 26 occasions.

Rear Admiral Sanjay Mahindru congratulated the Cadets for their impressive performance, stating that it was very exhilarating to witness their memorable display and made a special mention of the excellent standards of drill by the NCC cadets. The Flag Officer complimented the Maharashtra Directorate for their dedicated efforts towards imbibing self discipline, community building and esprit-de-corps among the cadets. He also praised Sports and Youth Affairs Department of the State Government who have provided full support to NCC.

Various NCC training activities by the Army, Navy and Air Wing Cadets were displayed with josh and enthusiasm. A colorful cultural show and stalls displaying NCC activities were the other attractions.The parade was attended by a number of military and civilian dignitaries including Dr Shashikala Wanjari, Vice Chancellor of SNDT University, and Dr MA Khan, Registrar of Mumbai University. PCP/DJ 15 30 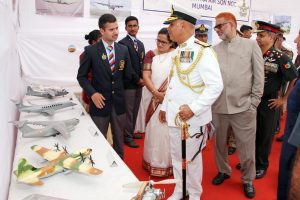