Pune 24 July 2017 (PCP NEWS NEW DELHI): The government allowed the Indian Army to make ‘Emergency Procurement’ without going into red-tape-ism, to be prepared for a ‘Short Intense War’, for this Chopper power is increased on Border, as per the sources of PCP News.

According to Indian Air Force, Apache will be the first pure attack Helicopter in the Indian forces. The IAF already operates two squadrons of the Russian-origin Mi-25 and Mi-35 attack helicopters, which are deployed close to the front-lines on the Pakistan border. But these helicopters are on the verge of retirement and were designed only to carry troops into heavily defended territories.

These Helicopters are equipped with laser and infrared systems for all-weather, day-night opera-table, the Apache fires the Hell-fire Air-to-Air Missiles, besides its arsenal of 70 mm rockets and an automatic cannon. Apache helicopters are capable of detecting 256 moving targets and engaging them, the twin-engine Apache is operated by two pilots.

According to officials privy to the development, Boeing, which manufactures these helicopters, will start delivering from early next year, and all 22 machines will be handed over to IAF in a time span of nine months. IAF has been asked to develop infrastructure, including hangers and helipads, to create base for these helicopters. The attack choppers can track up to 128 targets in a minute and prioritize threats. Armed with fire-and-forget Hell-fire Missiles, besides its Arsenal of 70 mm Rockets and an Automatic Cannon. These missiles equip the Helicopter Gunships with heavy Anti-Armour capabilities. The stealthy chopper is equipped with laser and infrared systems for all-weather, day-night opera-table. Both crew members are capable of flying the aircraft and performing methods of weapon engagements independently. PCP/DJ 14 30 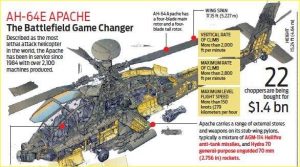