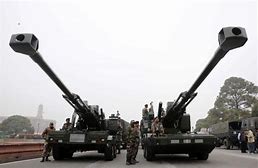 New Delhi: In a major boost to its Firepower, the Indian Army has inducted the indigenous Dhanush Howitzer and the American precision-guided Excalibur Artillery Ammunition in its inventory. According to Army sources, the top brass of the force was briefed about the induction of this weapon system and ammunition on Wednesday.The Excalibur ammunition which has been acquired under the fast track procedure can hit targets at extended ranges.

Army commander’s conference was briefed about ammunition’s induction, where several other matters were also discussed including the new post of the Chief of Defense Staff and induction of Made in India Dhanush artillery Gun. In the Conference discussion on the issue of creation of the new post of the Chief of Defence Staff and it came to notice that army commanders felt the need for creating structures that can help in effective integration of the new office with services, sources said.

Army Commanders also discussed proposals about giving enhanced grants for personnel, who are invalidated out of service due to injuries and disabilities before 10 years of service. Sources said that the commanders were also briefed about the induction of Dhanush artillery gun in the force and how it is going to enhance the firepower of the Indian Army in operations. PDN/SDJ 18 Oct 2019