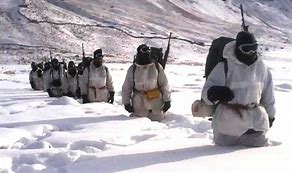 PCP News Siachin/Delhi (Spl Corres) April 03/2020 ; While the country is amid a battle against COVID-19, the Gallant Nunnus of the Indian Army are keeping up the vigil at Siachen, to keep the country safe, said Northern Command Spokesperson to PCP News Correspondent.

The Siachen was a military conflict between India and Pakistan over the disputed Siachen Glacier region in Kashmir. A cease-fire went into effect in 2003. The contended area is nearly 1,000 square miles of territory. The conflict was started in 1984 by India’s successful capture of the Siachen Glacier as part of Operation Meghdoot. India took control of the 70-kilometre-long and its tributary glaciers, as well as all the main passes and heights of the Saltoro Ridge immediately west of the glacier, including Sia La, Bilafond La, and Gyong La. Pakistan controls the glacial valleys immediately west of the Saltoro Ridge. India gained more than 2500 square km of territory because of its military operations in Siachen. Both countries maintain a permanent military presence in the region at a height of over 6,000 metres (20,000 ft). More than 2000 people have died in this inhospitable terrain, mostly due to weather extremes and the natural hazards of mountain warfare.

Northern Command, Indian Army posted a video of the Gallant Nunnus of Ladakh who are bravely serving the nation in harsh climatic conditions.

“As Nation resolves to fight Corona pandemic, Gallant Nunnus of Indian Army keep up the vigil on the icy heights of Siachen. No task too difficult, no obstacle insurmountable. Stay Home Stay Safe India, we are there for you. Ladakh Scouts Fire and Fury Corps,” said the Northern Command. PCP/IDN/DJ 11 15.